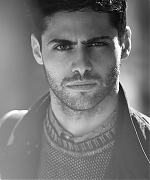 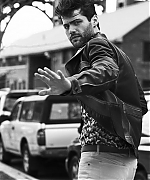 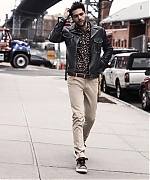 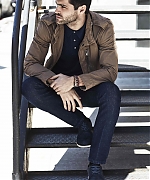 Standing at 6’3’’ with raven black hair, and piercing hazel eyes, Matthew Daddario definitely has a seraphic presence about him. It should come as no surprise, then, that he is one of the stars of Shadowhunters, a new show on the Freeform network based on The Mortal Instruments book series, about a centuries-old war between angels and demons. Playing Alec Lightwood, the stoic, selfless warrior on the side of good, Daddario was aware of how this character has been beloved by fans of the books. Luckily, this role suits him to a T—not only in appearance, but also because he can relate to Alec’s humanity. He tries to find the qualities that make Alec vulnerable, and translates that to the screen.

Originally from the Upper East Side of New York City, Daddario went on auditions for commercials as a child. “My mother wanted me to learn how to speak publicly, and she figured this would be a way to get me comfortable with speaking to other people,” he said. He would later attend Indiana University Bloomington, where he majored in business, seemingly abandoning acting entirely. But after seeing his sister, Alexandra Daddario, going after her dream of becoming an actress, he did an about-face.

“I wouldn’t say it was a mistake to study business in college, but it wasn’t my passion,” he said. “I was doing something that I thought would be best for my future. I then realized that business is not the thing I wanted to be doing, but thought I should be doing.”

Daddario already looks the part of a star, and has amassed a hefty social-media following, but he knows that this isn’t enough to secure lasting success in his industry. For him, great actors become iconic based on their performances. Harrison Ford, for instance, is someone he admires. “He became part of our culture because of great roles like Indiana Jones and Han Solo,” he said. “Getting great roles like that is something every guy wants.”

And though Alec in Shadowhunters may not be as renowned as Ford’s career-making personas, it is an important launch pad to rocket to greater things. Indeed, this up-and-comer has his sights set on the stars. As he said, “If I didn’t go into acting, I would have tried to be an astronaut.”

Rising to stardom with “Shadowhunters”

You auditioned for the original film, The Mortal Instruments, and didn’t get the gig. Did you feel vindicated in any way after getting cast in the television series?
When I got cast in the show, I wasn’t thinking about the movie. Also, I don’t believe that feeling vindicated requires feeling animosity or bitterness. And I wasn’t bitter about not being cast. So, I didn’t feel vindicated, but, in this instance, they made the right choice.

How would you describe Alec, the character you play on the show? And do you share any similarities with him?
I share many. Alec is controlled. I think that I used to be very controlled. I also consider others before myself to a fault, which he also does. Not that I’m a Saint, of course. I think it’s kind of selfish to put everyone before you because it’s this feeling of control—you’re the one that’s going to make the choice, and not giving people the respect to accomplish their own tasks. It’s almost like a benevolent dictator. Now I understand that people can, and should accomplish things on their own. People are smart; they are more capable than I am.

How do you feel about playing, essentially, a gay angel-slash-warrior?
It’s all about context. Yes, he’s gay, but he’s also a lot of other things. He may be half angel and a soldier, but he’s also a brother, and a son. These things come with certain responsibilities. So when I look at Alec, I don’t look at his supernatural aspects—I look at his humanity. This is something that I can relate to. I’m a brother; I’m a son. I think Alec struggles to find happiness in life. He doesn’t know how to seek it out for himself.

How has starring in a television show, which already has a built-in fan base, affected your personal life?
I really don’t know if it has. My life hasn’t really changed. Now, I just have new opportunities, which has been nice. I get to travel more. Also, I now get asked questions, and people really want to hear what I have to say, which is crazy to me.

So how do you feel about the reaction from fans on YouTube and Twitter?
I appreciate it, and I think it’s fascinating. Anytime people get excited about something you’re doing, you should be honored—unless it’s negative. Luckily, I don’t get any negativity.

What is the most memorable fan reaction you’ve received so far?
Recently, I was near my apartment, walking back from playing football, and there was this young guy that recognized me. Usually, it’s younger girls from 15 to 20 years old. I never had a guy come up to me. He was very friendly, and we took a photo. He was very enthusiastic. It was very funny. I enjoyed that.

How would you describe your personal style?
I like things that fit. I like looking sharp. Honestly, I’m open to wearing almost anything if it’s not too loud. It really comes down to fit—even if it’s a little absurd or something that I don’t usually wear.

Who are you style icons, and why?
It’s on a case-by-case basis. I don’t know anyone that is dressed perfectly all the time. That would be absurd, right? Everyone has different jobs, and they wear what’s appropriate for their environment. And if you can dress for your work in a stylish way, then you’re a style icon in my book. A fancy construction worker—he’s out there!

How do you feel about Alec’s style?
He definitely has his own sense of style. He wears a lot of dark colors. It’s very utilitarian. I think that he has to spruce it up a little bit.