Matthew has done a new photoshoot and interview with 1883 Magazine. You can check out some amazing outtakes in our gallery and read the interview below. 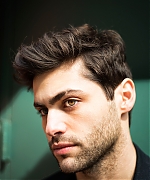 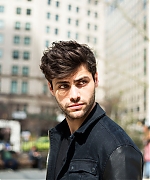 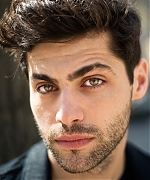 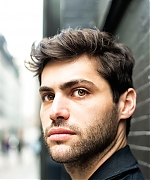 Taking a break from slaying demonic entities, co-star of the Freeform fantasy series ‘Shadowhunters’, New Yorker Matthew Daddario (aka. Alec Lightwood) discussed with us his role, tastes and thoughts on possessing an army of fan-girls.

Based on the fantasy novels ‘The Mortal Instruments’, ‘Shadowhunters’ brings the vision of author Cassandra Clare to the small screen. With one season of brilliant, outlandish events already under their belt, a second round of demi-angel on demon action can be expected, as Freeform announced a sequel series earlier this year.

Growing up, was acting the only thing you could see yourself doing or was there anything you could have been doing now in place of acting?
Acting was more my sister’s thing, I only came to it through her. For a little while, my mum would have me do auditioning as a way of building public speaking skills and to give me confidence speaking in front of other people. I didn’t enjoy it much as I was scared of it and found it kind of terrifying. I had other things going on and it wasn’t until I was a bit older at 18 or 19 that I started picking it back up again.

If you could go back and tell your younger self some words of advice, what would they be?
It’s easy to say in retrospect, “I should have done this or that” but given the information that was available to me at the time I think I made pretty good decisions. So I would say, maybe I should have focused a little more on doing what makes you happy and less on what you think will lead to a more classical and successful career.

What your favourite artists or influences from any genre?
I think the people who like art and that kind of space are not people who are in any way similar to me. So for example, I really enjoy Jimi Hendrix, and he is the coolest singer ever. I don’t like guitar and I am not particularly musical but I think Jimi Hendrix is just the coolest. In another space I think that Picasso is super cool as he represents a person who was absolutely astonishing as an artist and then he moved away from the classical art and created something completely new which is astonishing.

So what would be your favourite Jimi Hendrix album?
Oh man, when I was sixteen a friend of mine gave me this anthology collection. I can’ t remember what it was called but it had all of his greatest songs, something like a 100 songs from all of his albums, including some different recordings that I had never heard before. I thinking listening to this anthology was one of those exposures to music that I had never had before. I remember listening to a recording of ‘Red House’ which I think is absolutely perfect.

What are the main differences between ‘Shadow Hunters’ and your previous films?
You know, I had never done any TV on set prior but I was never quite sure what the main differences between film and TV were, apart from the obvious things about scale and the amount of time it takes. But TV is practically different and it may not just be in this case, it’s really about the amount of time you spend with a character.It really becomes so involved that there is no escaping it. If you spend half a year in character as opposed to a movie, when it is more likely 3 or 4 months and at the same time doing far more material, it feels like you are creating something more real, and less pretend. On a TV show it’s more like myself and ongoing growth, whereas in a movie, which is a short story that takes place over a short period of time, it has that ongoing slow growth. You have a moment in time of a persons life and you are playing that for several weeks and months and on a TV show you go through large arcs, so from my perspective it’s fun to do both but they are entirely different things.

What so far have been your highlights on the show – on or off camera?
I like watching everyone else. It’s funny because one of my concerns before we started was that it was six months of filming, and what happens if you everyone’s a dork and you don’t like them. In our case luckily, we all really liked each other, so it became a very nice experience. It was doing something with my friends and it was very enjoyable not having to worry about any kind of interpersonal conflict. It just became a very fun six months where we were all working and supporting each other. You do get exhausted as it’s a lot of work but I never found myself saying ‘Man I can’t wait until this is over’, in fact I was quite sad when we finished.’

Many actors claim to find watching themselves on screen a surrealistic and unbearable experience, how is it for you?
Sometimes I will watch things and think ‘oh man I can’t watch this’, but no not really. I think I have always watched myself to see what I am doing and what I can improve so I don’t find it weird. People may not want to watch it as they might be really frightened by what they did, in which case it’s acceptable, but I don’t think much of it. I watch myself every Tuesday on live feed so I am kind of used to it.

Had you actually read ‘ The Mortal Instruments’ novels prior to your role?
Prior to the booking I had not, but I started reading them immediately on taking the role and sped through the first two and then the next one was a bit on and off while we were filming. I was also exposed to a whole lot of material online as there is a whole load of writings from the fans, everything from their own personal response to the story and of characters to things they come up with in their imaginations which can be quite creative at times.

What grabbed you about the role of Alec Lightwood? What was it about the character that you could empathise with and bring authority to?
I like Alec, because he is a sort of misguided young person. He has a lot of concerns and he is always concerned for the wellbeing of others. He spends a great deal of his time thinking about his family and his friends and not a great deal of time thinking about what he wants. So he is a very benevolent individual; however he suffers the consequences of that sort of missing what he needs and wants, and as a result he is this kind of closed off leader who thinks he is doing the right thing all the time but doesnt’ realise that a lack of inward reflection leads to poor decision making. So it was really nice to get to get a character who, as the season went on, slowly got taken out of that kind of stunted vision. We see that small, slow growth over the course of the season and in the next season I am hoping to take that further.

Before ‘Shadow Hunters’ you have been in a number of horror and romance films, how was the transition to fantasy?
It’s not really that different because the core of everything are a bunch of people, there are various types of characters and critters, but there are still the people and the concerns are primarily human. So the rules of social graces and interactions are still the same as we are still telling human stories just using different devices, so I haven’t found it all that different. Occasionally I giggle as sometimes you are talking to a wolf…half angel and half demon hunter and it does feel a little absurd but you put those things out of your mind…you take the world as it is and you run with it…there are moments when we review it and you say this is fun and whacky but you realise at the core of everything it is human.

Speaking of being human, sometimes as fans we can forget that our icons are simply human too. Who are your idols and have you met them.
The rule is never meet your idol, and so anytime you meet someone you have idolised I feel you are only ever going to be disappointed by meeting them. So with a passion I avoid getting close to certain people. For example, I really like Patrick Stewart and Ian McKellen and I’ve liked them all my life so I went to see them perform in New York, which was fantastic. My girlfriend wanted to go and wait outside to maybe see them but I said ‘no way’ because I am afraid they will disappoint me in a way. That’s crazy, but that’s just how it is. I try to avoid meeting people so I have mostly avoided people I have idolised. I would be very sweaty meeting any of them to be honest!

Moving onto your own fans, have you had any amusing or odd encounters with them?
I have had a few, I think of my fans being mostly young women, and recently I was walking home from playing football and a couple of young women and an excited young man – not really the type who I would assume to be watching ‘Shadow Hunters’ and I found that quite amusing. It was just very odd. For the most part people are very nice. Online people get a sense of anonymity so they say odd things…sometimes I think everyone is a bunch of wackos. I met someone at Disneyland the other day, I had some extra tickets and I passed a couple of tickets to a couple of young girls…they asked for a photo and it was nice being recognised. It is nice to be recognised but within certain confines. People seem to get sick of it but in the meantime I think it is very sweet.’

What’s it like then having a legion of fan girls?
It’s sweet, I don’t think that much of it. They like my work and I am basically working for them in that respect, when they have some love for my character and they are shrieking and screaming it shows me something is being done right. For the most part they are quite composed people and haven’t met all that many. I meet them at Comic Con but the most part I am just getting on with my day. I guess it could get weird. I haven’t encountered anything like that yet. Maybe one day.

What do you do to keep grounded and to escape from work?
Immediately after filming you have time to read a lot and watch TV, travel and that kind of thing. Then there is that sort of lull period in between work you do auditioning again. I try to do some writing, doing some scripts, talk to people about other projects and what we could be filming. You do have down time so you need to find things to do – unfortunately the work out regime seems to fall apart when you have down time! You seem to got more done when you are working!

Catch Matthew playing Alec Lightwood in season 1 of ‘Shadowhunters’ via www.freeform.go.com
and we can look forward to season 2 coming in 2017