The Philosophy of Acting with Matthew Daddario

We must be in a dream because Matthew has a new photoshoot!? Matthew talked with VMAN about acting and his current series Why Women Kill. You can read the interview below and check out the photos in the gallery. I hope we get some more from this photoshoot! 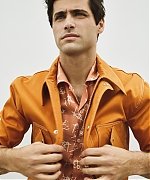 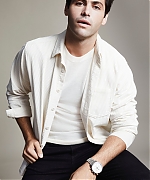 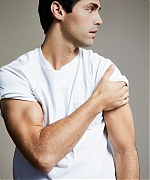 VMAN – There are actors. Then there are ACTORS, who’re greater than the usual crop. Then, of course, we have actor’s actors, the class that supersedes even the capitalization to denote top-notch ability. Matthew Daddario is kind of like a combination of all three.

When I ask him why he decided to become an actor, he explains, “The film business, acting in general, is an art that is also a productive business. People consume it as part of the culture as part of society. I think there’s something about it that satisfies several needs that I have from a career perspective.”

When I ask him to talk about how he’d describe “Why Women Kill,” his newest role, to someone who hadn’t heard of it, he says, “I just tell people, listen, you’re going to like it. Because I honestly believe that. So I’ve been telling people that it’s in 1949, it’s about a bunch of people, a little bit heightened. And in the end, some people are dead.” The conviction is in the fact that just watching the show is enough for you to understand why you’d want to keep watching.

Set in 1949, Daddario stars as one of the leads in the Paramount + show’s second season, alongside Allison Tolman, Lana Parrilla, and Nick Frost, among others. He plays the character of Scooter, an actor (re: “aspiring”) who’s looking for his big break in Hollywood, his shot at stardom. And he finds it through more unconventional means, that being the financial backing of one Rita Castillo (Parrilla), a woman married to a man with a fortune, and nothing more.

Scooter is the kind of handsome, suave, charming gentleman of the ‘40s and ‘50s that you’d swoon for then and look right past now. He says “bay-bee” and “dawll” with the most affected accent this side of the Hollywood lot. In his very introduction to the audience, he passes by a couple of women on the street who can’t help but blush right at the sight of him, as they were wont to do at the time. Scooter simply shoots them a look and a smirk, walking backwards as I wonder whether he’ll hit the newspaper stand right behind him. But he’s the effortlessly cool old Hollywood hero, he swivels and smoothly glides past it, allaying my fears and setting the character’s tone.

“I figured that Scooter would be this guy from the Midwest who came out to LA,” Daddario says, “And he’d watch a lot of films. So I watched a lot of the films he watched, from the ‘40s and ‘50s, the Arsenic and Old Lace types. I tried to copy Cary Grant’s character a little bit with the voice. He talks in this way that isn’t a real way of speaking, and I figured Scooter would have that otherwise he’d sound like he was from the Midwest.”

He continues, “And I have him behaving like a 13 year old, someone who’s constantly encountering somebody that asks him to do something and he just doesn’t understand what the heck they’re asking. It’s 13 going on 30.”

In many ways, Daddario is the embodiment of Scooter. Well, the embodiment of what Scooter aims for, to be precise. Daddario has the unassuming charm you’d expect of a Cary Grant-type without the air of pretense and glamor that would imply. His New York accent and tonal shifts in his speech make you listen close, anxious that you’ll miss a word he’s saying. But that just means you’re that much more interested in hearing what he has to say.

He’s not going to Clark Gable you and sweep you off your feet, but that’s probably because he doesn’t want to. He speaks with the quiet confidence of a man who knows it all, even if he outright says he doesn’t.

But unlike Scooter, Daddario clearly understands what he’s doing and he has an acute awareness of the industry he’s in. “As an actor, you’re always worried about the next part, the next thing, no matter how hirable you are,” he says.

Plus, apart from his career in movies, this is just his second lead role in a TV show in five years, following his turn as Alec Lightwood on the Freeform classic “Shadowhunters,” so clearly he has the acting career Scooter’s been scoping auditions for.

The glint of the business does entice Daddario, though, just like it does with Scooter. But it’s less about wanting to be part of the legacy of excess that suggests, and is more attuned to the artistic aspect of being in the movie business. I ask him about what’s next on the (cue) cards, he says, “I want to do some things that are a little bit more independent, I want to do some things that are big budget, I want to see all of it, I want to do all of it because it is a fascinating business, and you have the ability to act in all these different roles and capacities.”

Being an actor, an ACTOR, or an actor’s actor, none of it is really about your particular level of skill as a performer. It’d be easier to tell people you’re a good actor rather than have them see it, the “fake-it-till-you-make-it” school of acting that Lee Strasberg probably didn’t endorse.

It’s all about the ability to convince people you’re worth paying attention to, commanding respect with your aura alone. And enough charm to actually downplay the authoritarianism that aura could become.

Daddario has that. He makes you firmly believe that he’s an actor worth his salt, through the utmost conviction with which he sells himself and his passion for the field, whether it’s with big fan draws like “Shadowhunters,” or under the radar flicks like 2021’s Trust. He doesn’t even have to do it earnestly, it just naturally emanates from that personable drawl of his.

Why Women Kill: 2.05 ‘They Made Me a Killer’ Screen Captures