BuzzFeed: 27 Things We Learned On Set With Matthew Daddario 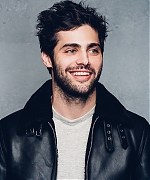 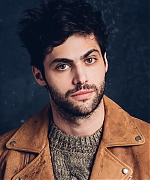 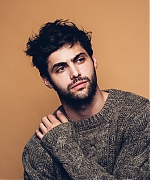 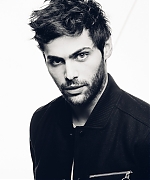 BUZZFEED – 1. If anyone could play you in a movie, who would you pick?
Cate Blanchett would kill it. Can you see if she’s available?

2. What’s the first album you ever bought?
Hahaha, no.

3. Describe your style in three words.
Things that fit.

4. Craziest fan story?
One time I walked in to a store and a guy came over to help. He’s talking to me for a minute and I’m being semi socially-capable. He takes a step back, looks me up and down and says, “Hey, wait a minute…you look like that boy from that show.” I go, “Yeah?” And he says, “Yeah, that kid from (show name redacted) show. Damn. You look just like him.” It was a different show with a guy who shoots arrows. I was like, “Oh, yeah I hear that sometimes.”

5. Last book you read?
[I’ve] been reading Dune. It’s nice when you haven’t read a book in ten years so you forget most of it and it’s like reading it anew. So great.

6. What’s your biggest pet peeve?
When that dweeb stops at the top of the escalator realizing he’s not sure if he’s going in the right direction and it causes a five-person pileup behind him.

7. What’s the most memorable concert you’ve been to?
With things like this the memorable ones seem to be the ones people can’t remember.

8. Last person who texted you?
My manager, Donnalyn. Making sure I answered the BuzzFeed questions. I told her I did.

9. Which emoji do you use the most?
The one with the eyes where it looks like he’s caught but tries to poker face and fails. Also sometimes I write out the description of the face.

10. Who’s your doppelgänger?
Some dude who lives around Union Square keeps getting me in trouble with friends. About 10 different people: “I saw you at Union square and called out but you didn’t answer!” Me: “I’m in Toronto.”

11. Favorite reality show?
That one where they cook a meal under pressure and if they don’t do it in time or it isn’t good enough they have to enter a gladiatorial pit vs some unspeakable ancient horror. Love that show. Also, I like Planet Earth.

14. Guilty pleasure?
Frying cheddar cheese and parmesan in a cast iron skillet and then eating it until I’m gross.

15. Go-to comfort food?
I put that cheese from above in my belly until I am comfortable.

18. What’s one word you say too often?
I probably curse too often. It’s fun to do with friends, enemies, when you fall down, when you watch sports…all the time really. It’s just kinda great. But if anyone reads this…don’t curse. It’s bad, and if you all start doing it all the time it won’t be as fun when I do it.

19. Favorite place to visit?
The Natural History Museum in New York. They have a gem I want to steal. But I won’t. Winky face.

20. Name something on your bucket list.
This feels like a very personal question, BuzzFeed. I am tempted to make something up. I want to be the president for two years and am impeached successfully after a fake scandal. Then, the following year I’m vindicated, and everyone wants me to be president again but I’m busy with other stuff.

21. If you could invite five people—living or dead—to a dinner party, who would they be?
I was just in Rome. Give me an emperor, a gladiator, a cynic, an actor and some tough Roman lady. Then we drink wine.

22. Biggest fear?
Food poisoning. I hate it. I hate it so much. And you know what’s weird? High end restaurants are most often the guilty ones.

23. Best piece of advice you’ve ever been given?
“The best laid plans of mice and men often go awry” seems to always prove itself accurate.

24. Background wallpaper on your phone?
A dog eating flowers.

26. What’s the last thing you searched for on Google?
“What is a dry riser.” I could pretend that it was something funny or deep but that would be lying, and everyone knows people don’t lie in interviews to make themselves more appealing or interesting.

27. What do you hope for in 2017?
I wrote out a sincere and sappy answer about society as a whole but realized I just really want them to find Genghis Khan’s tomb this year.

Shadowhunters: 2.02 “A Door Into the Dark” Promo