Matthew Daddario To Star In Thriller ‘Into The Deep’

DEADLINE – EXCLUSIVE: Cast has rounded out on Into The Deep, a thriller from Signature Films and Tea Shop Productions that is now shooting in Cornwall, UK.

Ella-Rae Smith (The Stranger), Jessica Alexander (A Banquet), and Matthew Daddario (Shadowhunters) are leading the pic, which comes from debut director Kate Cox. David Betton (The Banishing) penned the screenplay.

Into the Deep follows Jess (Smith), a young woman who, desperate to escape her small coastal town, meets a stranger promising a romantic escape. As the couple spend time together on his yacht, a change in circumstances results in deceit, mistrust, and violence.

Producers are Sarah Gabriel and Marc Goldberg of Signature Films, and Mark Lane, Leonora Darby, and James Harris of Tea Shop Productions (47 Meters Down), with executive producers Christian Mercuri of Capstone and David Haring of Amet Entertainment. Capstone and Amet are financing and Capstone will handle worldwide sales at the virtual AFM in November.

Great news! Matthew’s upcoming movie Trust (previously known as Push) has been acquired. The movie is set to be released on March 12, in select theaters and via paid video on demand. Can’t wait to see this movie! 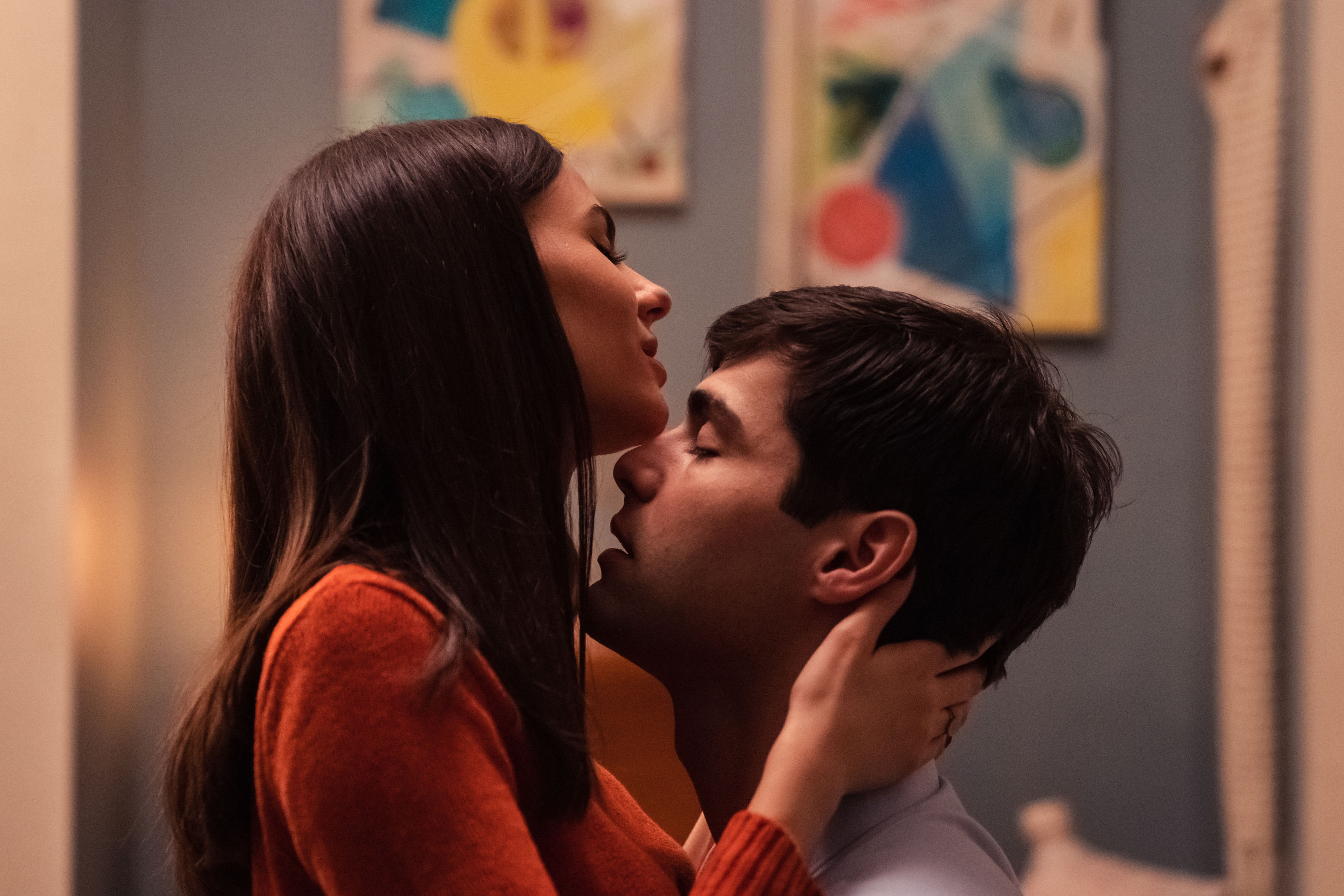 The boutique distributor will roll out the film in North America, the U.K. and Ireland, Variety has learned. The release is set for March 12, in select theaters and via paid video on demand. Josh Spector negotiated the deal for Vertical, with UTA Independent Film Group on behalf of the filmmakers.

Set in the glamorous art worlds of Paris and New York, Justice plays a gallery owner married to a newscaster, played by Daddario. When two seductive strangers enter their lives (Lucien Laviscount and Katherine McNamara, respectively), the couple is faced with temptation, jealousy and a mystery that upends their lives. The Exchange is handling international sales on the project, directed by Brian DeCubellis.

“On behalf of my fellow producers, we are so excited to partner with Vertical Entertainment to bring our film ‘Trust’ to screens in North America and UK/IE. This stunningly talented cast and crew joined forces to pour so much passion into every shot of this chemistry-fest of a movie. As a filmmaker, I couldn’t be more proud or grateful of the collaborations and the outcome” DeCubellis said.

Rich Goldberg, Vertical’s co-president, said the film was “a star-powered, temptation driven film with enthralling performances from a talented cast. We’re thrilled to partner with the talented filmmaking team to bring the film to audiences this March.”

Matthew Daddario to Star in Season 2 of ‘Why Women Kill’

Exciting news! Matthew has joined the cast of Season 2 of Why Women Kill. Matthew’s sister, Alexandra, starred in the first season. There’s no date yet on when it will air, but we will let you know when we hear something!

TV LINE – Lana Parrilla has booked a new TV role, and this one seems only slightly less wicked than the last.

The Once Upon a Time alum is among four additions to Why Women Kill‘s Season 2 cast, TVLine has learned.

New episodes of the Marc Cherry-created anthology will take place in 1949, exploring “what it means to be beautiful, the hidden truth behind the facades people present to the world, the effects of being ignored and overlooked by society, and finally, the lengths one woman will go to in order to finally belong,” the logline teases.

Parrilla will co-star as Rita, the sardonic wife of the wealthy and evil (and yet-to-be-cast) Carlo Castillo. As she waits for her elderly husband to die, Rita runs the garden club with an iron fist and spends much of her time engaging in an affair with a younger lover.

Said lover, Scooter, will be played by Shadowhunters vet Matthew Daddario. A charming and sexy (but not-so-bright) aspiring actor, Scooter is well kept by Rita but — gasp! — pursues a secret relationship elsewhere. (Fun fact: Daddario is the younger brother of actress Alexandra Daddario, who appeared in Why Women Kill‘s first season.)

Also joining the cast are B.K. Cannon (Switched at Birth) as Dee, the wry and brassy daughter of Allison Tolman’s Alma, and Jordane Christie (Containment) as Vern, a tough and rugged private detective. As reported earlier this week, Nick Frost (Into the Badlands) will also co-star in Season 2, playing Alma’s husband.

There’s currently no timetable for Why Women Kill‘s return.

I’m sad to say that Shadowhunters has not been renewed for a fourth season. The second half of season three will air in 2019 and the series will also have a special two-hour final to close the series. You can tweet on twitter #SaveShadowhunters and #RenewShadowhunters to help see if Netflix can pick up the series.

VARIETY – Freeform has canceled supernatural drama series “Shadowhunters.” The show will end with a special two-hour final at the close of the upcoming second half of season three.

“We are very proud of ‘Shadowhunters,’ a series that broke new ground in the genre world and became a fan favorite,” the network said in a statement. “However, along with our partners at Constantin, we reached the very difficult decision not to renew the show for a fourth season. But as big supporters and fans ourselves, Freeform insisted on and championed the filming of a special two-part finale that would give devoted fans a proper ending. The twelve episodes will air in spring of 2019. We want to thank our talented creators, producers, cast and crew along with our colleagues at Constantin for their hard work and dedication and to Cassie Clare for her incredible book series. We look forward to the final chapter of this breakthrough drama.”

“Shadowhunters” is produced by Constantin Films. Todd Slavkin, Darren Swimmer, McG, Matt Hastings, Mary Viola, Martin Moszkowicz and Robert Kulzer serve as executive producers. The second half of the show’s third and final season — which will consist of 12 all-new episodes — is slated to premiere in spring 2019

TV LINE – It seems there’s no end in sight for Jace and Clary’s war against Valentine — Freeform is renewing Shadowhunters for a third season, TVLine has learned.

This news comes just two days after Freeform held its annual upfront presentation in New York, which — due to scheduling conflicts — the Shadowhunters gang was unable to attend.
The second half of Season 2, currently being filmed in Toronto, premieres Monday, June 5 at 8/7c. As TVLine exclusively reported, Will Tudor (Game of Thrones, Humans) is joining the cast as Sebastian, an iconic character from Cassandra Clare’s Mortal Instruments novels, upon which the series is based.

“We really put our own spin on him the character,” showrunner Todd Slavkin tells TVLine. “As we’ve done with all the episodes you’ve seen, we’ve always had our own spin on everything — and Sebastian is no different.”

The second wave of of nominations for Teen Choice 2016 has been announced. Matthew and Shadowhunters have been nominated! The awards will take place on Sunday, July 31, LIVE on FOX.

Voting for Wave Two is now officially open via TeenChoice.com, the FOX NOW app and Twitter. Starting today through Thursday, June 23 at 12:00 PM PT, fans can vote once each day per category, per platform user ID, for their favorite TEEN CHOICE 2016 Wave Two nominees. Vote via Twitter by tweeting a category hashtag (please see below) with the nominee’s name (either @nominee, or if the nominee does not have a Twitter account, please use #nominee). Fans may only vote for one TEEN CHOICE nominee per Tweet.